Apologies to Mark Twain* for bowdlerising his quote, but it has happened again – somebody has made something up on the internet, without a thought for fact-checking or journalistic integrity. What’s worse is they then used the unregulated media of Twitter and Facebook to spread these lies. Worse still, this latest fabrication sullies the name of that fair and balanced journalistic institution, Fox News. Laugh? I nearly tweeted.

Padraig Belton, in the Irish Independent, told us yesterday that the world is not always as it seems. To support this skeptical world-view, he cites the infamous “Brian Cowen hangover” interview and this picture that did the rounds last week:

In both cases, social media and citizen-journalism – not long prior heralded engines of a new democratic dispensation – were manipulated in political hatchet jobs.

Political hatchet jobs? I can see how the Cowen interview may have been politically motivated, but what’s the political motivation for “Fox News is rubbish”? Even if you could answer that, who cares? It’s not meant to be journalism. It’s meant to be a joke.

To illustrate the dangers of photo manipulation, he could have used North Korea’s nine-foot soldier, or Iran’s cloning-tool wars.  But he wanted to illustrate the threat of Twitter, so chose a joke.

That joke took a report of a multiple murder and tried to get a laugh at the expense of a cable channel renowned for screaming hyperbole and screw-ups. For example, the original, undoctored image was taken from a Fox News broadcast in which they mistakenly used a picture of Tina Fey on Saturday Night Live to illustrate an item on Sarah Palin. Here’s the video (if you can trust it):

Belton then trots out a litany of other supposed deceptions, some of them nothing to do with Twitter or Facebook – such as the Sunday Times using an illustration of John ‘Soap’ MacTavish, a character from the Call of Duty game, in a graphic of a failed hostage raid – and some of them actually unearthed by social media themselves, such as ITV’s mistaken use of video game footage in a documentary about IRA links to Gaddafi:

It is Belton’s mixing and mashing of media and platforms – very 21st century for such an avowedly traditional journalist – as he takes in broadcasters, papers, Twitter, Facebook , Wikipedia, and Youtube, that makes his point so hard to pin down.

The Fox News image is a joke. The Guardian’s Cowen tape and ITV’s IRA documentary were inadvertent foul-ups. The 50-cent commenters of China and Wikipedia editors of Capitol Hill are engaged in politics less filthy than the past (remember ‘ratfucking‘?). The  RTE-bashing over the Sean Gallagher debate continues the Indo’s delusion that a false tweet lost him the presidential election rather than his floundering inability to decisively rebut its fabricated content on the night.

So what is Belton’s point? If it were simply “do not believe everything you read online”, well, duh. However, he concludes:

Quality journalism, employing social media like Dorian’s portrait to preserve the likeness of vitality, is too quick to abandon its fact-checking traditions.

That sounds depressingly like a newspaperman putting his own trade on a pedestal of probity (despite every print journalist you ever met knowing someone who has massaged a quote, fudged a statistic, or concealed one of their screw-ups). Belton is in good company – John Fleming had a go at Twitter a couple of weeks ago on Hugh Linehan’s Irish Times blog, John Waters has borne the internet curmudgeon’s cross for the Irish Daily Mail (they don’t put his columns online, funnily enough), and Eamon Delaney maintains, terrifyingly, that we should regulate what has become a “cacophony of noise, but at the lowest common denominator”. Conor Brady and Alan Crosbie have both supported calls for State support of the press, which would just bring regulation by another route.

Time for some whataboutery

Donald Segretti faked a letter to discredit one of Nixon’s political rivals. Newspapers followed it up, yet nobody denounced the postal service as a network used by liars. The Sunday Times agreed to print the “grotesquely … fake” Hitler diaries, yet the writing and serialisation of memoirs remains inexplicably legal. If a newsroom takes an anonymous call that contains libellous information, we do not blame the telephone network. If a lobby journalist misinterprets a hand-written note from one minister to another, we do not call for the regulation of paper and pencil.

If a journalist prints or broadcasts material from social media networks, or wikipedia, or a message board, or email, and never bothers to check whether it is true, it is not a failure of the internet, it is a failure by the journalist.

Flesh-and-blood sources feed bullshit and PR bumf to journalists in person and on paper every day, but they have developed tools for sniffing it out. Newspapers should be extending the use of these tools online and developing new ones when they fail, rather than indulging in this incessant hand-wringing over media their correspondents barely understand and rarely use. Complaining about the climate isn’t going to change it.

– this one is really by Mark Twain. *The one in the headline is by his friend, Charles Dudley Warner. I knew that, but wrote it anyway.

It was quite entertaining to watch this Sky News interviewer try to tame Jeff Jarvis on the issue of the Times paywalls (the Sky guy looks to be shielding himself with some sort of tablet computer and uses the word “monetarising”, so the odds are stacked against him from the start). 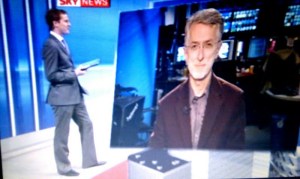 While Jarvis’s language about Rupert Murdoch is a little direct, it is difficult to disagree with his conclusions – the Times is cutting itself off from the rest of the web. Therefore, how will it grow as the web grows? How will it increase its audience and reach online, how will it attract new readers via the new tools the Web is sure to throw up?

The New York Times, which tried a paywall experiment and relented —  partly under pressure from its own columnists unhappy with the lifeblood of links, tweets and comments being tied off — will install a metered model in January, where incoming blog links do not count against a reader’s allotted “free reads”. Given that most of the NYT content I read is via a blog or twitter link, I don’t see how that will raise any extra cash from me,  but at least they’re still in the open.

Malcolm Coles offers up a different problem – the divisions between the paper Times and Sunday Times start looking a lot shakier online:

“Forcing people to subscribe to both sites but keeping them entirely separate, with no cross linking, seems a bit odd.”

The people who work there make an eloquent case for online journalism (although not one of them mentions charging): 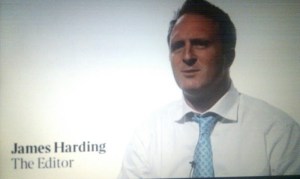 We have been here before. When Rupert Murdoch bought the Wall Street Journal, he was very gung-ho about dropping their paywall, until the economics of the situation were brought home to him.

The irony of the situation is the Times website now looks fantastic. With the relentless focus of an operation that must either work or drop somebody in the shit, it has been redesigned. It is clean, there is hierarchy, the vibrant colours are from the Times-branded palette, the use of pictures is great. The interactive graphics and the Spectrum photo galleries are especially eye-catching.

However, it all raises the question that if this was worth doing as a spring clean before the paywall goes up, why wasn’t there this level of excitement and interest in how the website looked when it was officially chasing unique users and advertising money? The FT reports this morning that fewer than 10% of the Times’s unique 21 million-ish users are likely to pay for the revamped content. Would this level of energy and creativity have brought in enough extra unique users to justify staying in the open?

Journalists these days are being constantly harried to find the business model in what they do. On the Times’s and Sunday Times’s new-look websites, (video here, if you can stand the awful soundtrack and a PaidContent slideshow of pages here), the online editorial people have clearly upped their game, the designers have played a blinder and the infographics team – especially on the excellent eureka graphics – have pulled out all the stops. They are more than pulling their weight in trying to adapt to this experimental business model – but where is the commercial side of the operation? What are they bringing to the table?

It would be a terrible shame if, having come up with an elegant, if  newspaperesque, design (almost to the point of the website being a better designed paper than the Times itself), all of this hard work is seen by fewer readers than any other Fleet Street website. If enough of them pay, of course, it will be hailed a success, but for now it feels like Jarvis was right, and this is a retreat into old ideas rather than a striving for new ones.