The Miracle Lambs of Minane, first published in Clarkesworld in October of last year, has been selected for inclusion in The Best of British Science Fiction 2018.

To say I am pleased would be an understatement. A look at the table of contents over at editor Donna Scott’s website should explain why. To be listed near these writers – such as G.V. Anderson and Natalia Theodoridou, who have written some of my favourite short stories over the past couple of years, and Alastair Reynolds, Lavie Tidhar, and Dave Hutchinson, whose names I can see on my bookshelves – is both daunting and flattering.

As an added bonus, the book, which is published by Newcon Press, is being launched at the 2019 Worldcon in Dublin. So odds are I’ll get to meet at least some of these people in a city where I spent most of my 20s. 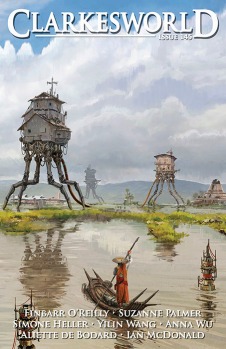 I’m delighted that such an Irish story will get an outing at the first Irish Worldcon (second one in Cork in 2026, anyone?) and I’m very grateful to Neil Clarke at @clarkesworld for publishing it and the connected Last Boat Builder in Ballyvoloon in the first place.

As a final note, just to assuage the fears of my parents and my friend Marjorie, a place in the Best of British Science Fiction did not mean I had to surrender my passport, nor have I sworn allegiance to Her Maj. They are a fierce inclusive lot, the old SF community.