(UPDATED UPDATED UPDATE) OK, so Rich Horton didn’t see his way to including my short story, The Last Boat-Builder in Ballyvoloon, in his Year’s Best Science Fiction & Fantasy. It would have been nice to go for the trifecta – Gardner Dozois, Neil Clarke and Horton (or the quadfecta of Dozois, Clarke, Horton and Coode Street’s Jonathan Strahan), but, you know, not everybody likes everything and some stuff always gets lost in the edit. I get that, and I am sanguine about the frankly massively unexpected success my one story of 2017 has had. However, Horton has seen fit to recommend me for this year’s Campbell Award. Just to sum up, I had one story published last year, and it got reprinted twice (Dozois and Clarke), recommended in the Locus Reading List and now Rich Horton has recommended me as worthy of consideration for the Campbell. I couldn’t be happier …

(UPDATED UPDATE: The Last Boat-Builder in Ballyvoloon has been chosen for the Locus Recommended Reading List.)

(UPDATE: The Last Boat-Builder in Ballyvoloon has also been included in Night Shade Books’ Best Science Fiction of The Year Vol 3, edited by Neil Clarke — I couldn’t be happier…) 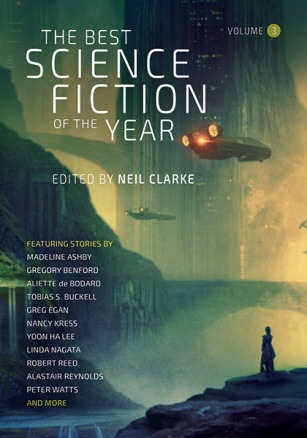 In August of last year, I received my first acceptance for a short story, The Last Boat-Builder in Ballyvoloon, and it appeared in the October 2017 issue of Clarkesworld. I could not have been happier. Or so I thought.

My family read it and liked it, random people read it online and tweeted me how much they liked it. People even reviewed it. I thought I was chuffed with the electronic version of it (and the podcast) until my buddy Jeff sent me a print copy from Toronto as a gift. I could hold in my hand a printed science fiction magazine that contained something I had spent a long time wringing from my already word-addled brain. I could not have been happier. Or so I thought.

In November, the story was picked to be re-printed in the 35th edition of Gardner Dozois’s Year’s Best Science Fiction, a book whose previous editions I checked out of Cobh library and read looking out over the harbour that formed the basis for the one in the story (that’s the view from the library window above – taken from Cork County Library’s twitter page). I could not have been happier. Or so I thought.

In January, after a nudge from Neil Clarke, the editor of Clarkesworld, I checked with the Writertopia website to see if my story could be added to their eligibility list for the John W. Campbell award. And apparently it could. I could not have been happier. Or so I thought.

What I hadn’t appreciated was this:

Technically, it’s YOU that are eligible for the Campbell Award. Your story is eligible for Best Short Story. 🙂

My story is eligible to be nominated for a Hugo Award. I couldn’t be happier…